The Thug Life Unicorn Posse is a 90 minute horror/comedy written in the same spirit as the brilliant British film Shaun of the Dead.  The script was inspired by a version of this tattoo. 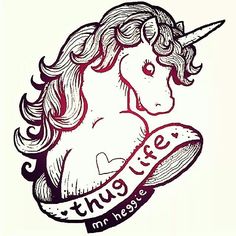 One stormy night at the zoo a depressed rhinoceros is freed from his pen by a mighty lightning bolt from heaven.  While enjoying his newfound liberty the rhino wanders through town to a horse racing track, where he enters the stable and mounts the fillies.

A few months later very colorful unicorns start to appear around town.  They are about the size of goats and extremely agile.  Several wander to a bar one night and drink some beer out of half empty bottles stacked in boxes behind the bar.  The unicorns very much enjoy being drunk, and in their search for more beer they look through the window and into the bar.  It is closing time and two drunks with extremely distended beer bellies stagger toward the rear exit.  When they come outside they are promptly gored by the unicorns, who feast on the beer and blood that gushes from their bellies.  This is the moment when unicorns also discover their unquenchable thirst for blood.

Word goes out like wildfire, and after a hunter and his son are gored in the woods the town hurriedly evacuates in fear.  There is an overhead shot of the traffic lined up to leave Chester; the viewer also sees a few odd cars trickling into town.  Daring people are flocking to Chester hoping to trap a unicorn for a variety of reasons: as a gift to a daughter; for sale to mysterious Asian buyers; to capture one for a trophy, either whole or the head or even just the horn; and for use as an aphrodisiac when lovers drink from the inverted horn.

They all stay at the Chester Inn, where the psychotic innkeeper lives with his two daughters.  The innkeeper rules his hotel with an iron fist that instills fear and respect in most of his guests; then the innkeeper quickly becomes caught up in the hunt himself.  More characters are gored in very unicorny ways while several of the shallowest romances ever (to aspire) to grace the screen play out.

Charlie, the bartender of the place where the unicorns first discovered their love of beer and blood befriends the little critters with cherry lambic beer and cow's blood.  While the unicorn hunters are getting killed by unicorns, and humiliated by the psycho innkeeper, Charlie hires carpenters to expand his bar into a tourist trap:  Charlie's Brew BQ and Unicornutopia.

Charlie saves the day for the few surviving characters and the film has a happy ending that invites a sequel.


Here are the first few pages of the script....

The Thug Life Unicorn Posse
A film by Robert Charest

A rhinoceros lies in his mud bath looking dejected and depressed.  It is raining and the audience cannot discern if the droplets running from his eyes are raindrops or tears.  As he lies there the rain intensifies.  There is a crash of thunder followed by a mighty lightning bolt that smashes the rhinoceros’ pen, leaving a gash of rubble in the concrete wall.  The rhino gets up, ambles over and inspects the heavily damaged concrete wall, then begins to dislodge and remove the freshly broken stones with his horn.  He then moves alongside the wall and smashes it with his backside, eventually picking and bashing his way to freedom.
EXT.  A MONTAGE – NIGHT
Show a collection of scenes of the rhinoceros: outside the zoo looking back through the rain…then walking down the road…wandering through some backyards…and across a field…and alongside a river…all in the rain.
EXT.  A HORSE TRACK – NIGHT
The rhinoceros wanders out of some trees and onto a horse track.  He roams to the middle of the racing oval and gazes about the place.  Then his eyes light on the stable in the distance and he rumbles toward it.
INT.  A HORSE STABLE – NIGHT
The rhinoceros enters.  Several fillies are in their stalls.  Some are standing with their heads out and some with their tails out.  The rhino scrutinizes and licks one’s face then sees a tail sticking from the next stall and turns his attention to it.  He sniffs it then lifts the tail with his horn.
FADE OUT
INT.  A HORSE STABLE – DAY
Several mares are lying on their sides giving birth to baby unicorns.  The unicorns are various colors—white, orange, red and purple.  They can be mottled or plain and have rainbow colored horns.  Make them so cute that everyone will want a stuffed one for Christmas.
EXT.  A FIELD – DAY
Six unicorns are frolicking in a flowery field.  They stand a little more than waist high to an average male human.  I envision them being as agile as rock and tree climbing goats and just slightly larger.  The unicorns run over and play in some nearby trees then disappear into the woods.
INT. A NEIGHBORHOOD BAR – NIGHT
Background music is playing and about twenty patrons are hanging around a pool table and at the bar drinking bottles of beer.  Show at least seven or eight distinctly large beer bellies.  Also show particular focus shots on CHARLIE the bartender and EARL the hunter.  Then show two unicorns furtively looking in through the window.
EXT.  BEHIND THE BAR – NIGHT
The two unicorns come around the corner and lift their noses to the enticing scent of beer.  They track it to a stack of several cases of empty beer bottles and start sniffing excitedly.  One uses its horn to open the top box and they pick out two half full bottles with their teeth.  They lift them into the air and suck out every drop.  They leap around then start licking the bottles and using their teeth to lift more bottles straight up into the air to empty the remnants down their throats.
FADE OUT.
EXT. BEHIND THE BAR – NIGHT
The unicorns are quite inebriated and leaping around in a mess of bottles and shredded boxes.  They each spear an empty beer bottle onto their horns and smash them in a play sword fight.  They are having a drunken blast.  They smash several bottles in this manner and snicker and giggle with broken glass everywhere.  Charlie the bartender comes out with a bag of trash and sees the unicorns standing in the mess.
CHARLIE
What the holy crap!
The unicorns hop and run into the trees behind the bar.
INT.  THE BAR – NIGHT
Charlie re enters from the rear.  His expression belies his deep shock.  Earl is sitting at the end of the bar.
CHARLIE
I don’t believe what I just saw!
EARL
You do look spooked.  Did you see a vampire sinking fangs into a werewolf?
CHARLIE
Not quite but you’re not far off!  I think I just saw two unicorns!
EARL
You need to stop drinking the gin.  The elderberries are scrambling your brains and your eyesight.
CHARLIE
Perhaps, but there is a large mess of broken beer bottles out back and I just walked out to see two very colorful waist high horse like creatures picking up empty beer bottles with the horns protruding from their foreheads and smashing them as if they were play sword fighting.
EARL (stands up)
I’m going hunting later this morning and want to get a couple hours of sleep beforehand.  I’ll see you tomorrow.
CHARLIE
Keep an eye out for unicorns.  Their horns look dangerous but if you were able to bag one I’m sure the horn would be worth a fortune.
EARL
I’ll keep that in mind if you keep this in mind: beware the elderberries.  Good night, Charlie.
EXT.  WOODS – DAYBREAK
Earl has a can of beer in his hand and is quietly picking his way through the trees with his rifle at the ready.  The hunter spies several unicorns.
EARL
(whispers)
Oh my God!  Charlie was right!
Earl aims the rifle and fires.  He hits a unicorn, who bleeds and drops.  Earl rushes from hiding to inspect the kill.  As Earl reaches what he supposes to be a carcass, one of the other unicorns appears and gently touches his horn to the bullet hole in the wounded unicorn’s breast.  The wound magically heals.  The healed unicorn stands up and with several others that appear they surround Earl, who is terrified.  The one he shot is particularly angry, and fierce, and charges at Earl and gores his beer belly.  Earl crashes to the ground and the unicorns immediately start feasting on the beer and blood that is gushing from his mountainous stomach.  One of the unicorns grasps Earl’s half finished can of beer in his lips and tips it up.  He then rejoins the feeding frenzy.